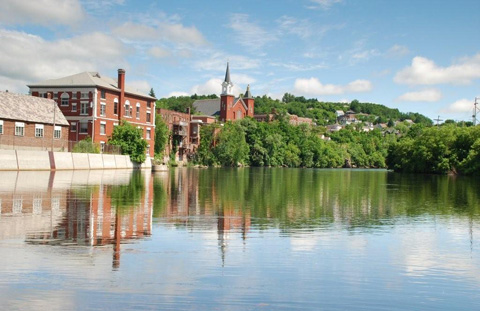 City of Berlin along the Androscoggin River by Robert Kozlow

Berlin, the "City that trees built", is the larger city of this region and is essentially a manufacturing and commercial center with developing tourism interests.

Berlin is only an hour from the Canadian border, French is its second language. The growth of Berlin reflects the diversity of the people who came to stay: French Canadians, Yankees from Northern New England farms, Norwegians, Italians, Irishmen, and Russians. They sought a chance to make a better living and found it in the mills, blacksmith shops, machine shops, farms, stores, railroad yards and in the long winters' logging camps. 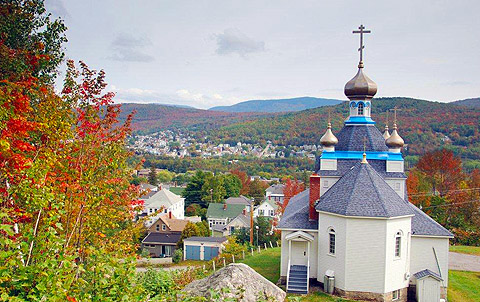 In recent years, Berlin's population has stabilized to around 10,000. The city has changed in size and appearance, buildings are being renovated and refurbished, new buildings have been built, Main Street is being revitalized and new small businesses have been added to create a new, growing and prosperous Berlin.

Of interest to tourists is the Northern Forest Heritage Park in the historic Brown House, also home of the Androscoggin Valley Chamber of Commerce. where they offer Boat Rides and hold events throught the summer and fall.

On Rt. 110 is the new Jericho Mountain ATV Park. Trails are maintained for off-road travel on ATV's and motor bikes and trails extend into the city of Berlin for your convenience.

Jericho Falls is a popular place to visit in the Jericho Mountain State Park, but not easy to find. Take the road into Jericho Mountain State Park. Keep an eye on your left for the gated ATV roads. You want the second one. Park somewhere on the side of the road and hike past the gate, following the dirt road for about 10 minutes or less. Midway along an incline through an open area, there is a flagged trail on your left with a small hand-written sign that says "Jericho Falls". Follow this trail into the woods - it's about a 5-minute hike from there.

There are events on Main Street throughout the year such as the Local Works Farmer's Market and Drive to the 50's. And in July there is the Jericho Mountain ATV Festival.

The Androscoggin River flows south from Lake Umbagog Wildlife Refuge in Errol, through 13 Mile Woods along Route 16 to Pontook Dam and Wildlife Refuge, and through the towns of Milan and Berlin. Its a great place to fish, kayak, canoe or raft. Its also a great scenic drive where moose, osprey and other wildlife abound!

North of the Notches, NH

North of the Notches, New Hampshire